Carvacrol is an oxygenated monoterpene which constitutes the main component of many essential oils of Labiatae including Origanum, Satureja, Thymbra, Thymus and Coridothymus (1). It was reported to have antibacterial and antifungal (2-4), analgesic (5), antioxidant (6), anthelminthic, antiparasitic (7) activities and as an antidote (8). Recently the essential oil of Origanum onites L. which is high in carvacrol content (9) and carvacrol (10) were shown to have cytotoxic activities in vitro. To the best of our knowledge, there is no previous report about the effect of carvacrol on tumors and carcinogenesis in vivo.In this study, antitumor activity of carvacrol was investigated against lung tumors induced by DMBA in vivo.

Adult Wistar albino rats of either sex (200-250 g; four animals for each group) were used in this study. They were housed in ventilated rooms with a room temperature of 20±2°C. All the experimental animals were fed with standard diet and water ad libitum,

Carvacrol (99.3 % purity) was obtained by fractional distillation of the Origanum onites L. collected from West Anatolia. The test material was dissolved in neutral sterile olive oil prior to application (0.1 mg.kg-1 i.p.) which is applied for four times in eight days. 9,10-Di methyl- 1,2-benzanthracene (DMBA, Sigma. StLouis. MO, USA) was dissolved in sesame oil (8 mg.kg-1 s.c.) and applied only for once to induce lung tumors in vivo. Control groups received olive and sesame oil and %0.9 NaCl alone and colchicine was used for standard antitumor agent (0.4 mg.kg-1 i.p.) 3 days in a week Each group used in the study consisted of four animals.

All the animals were killed by cervical dislocation under light ether anesthesia and lungs were evaluated macroscopically and microscopically under a photomicroscope (Olympus, Japan).

The macroscopic and microscopic evaluations of the lungs of DMBA group was observed to develop tumor-like appearances which was in dark red and brown color. At the margins of lungs, highly vascularized areas were also evident resulting in the loss of transparency and smoothness (Fig.1) whereas in control group in which only %0.9 NaCl was applied, there was no tumor development and typical healthy lung appearance was observed as expected (Fig. 2). In olive oil and sesame oil groups, tumors were absent, but the color of lungs were darker than NaCl group and the margins of lungs were not smooth. On the other hand, lungs of colchicine treated group were observed to have tumor like appearances at the surface of lungs, but much more less than DMBA group and also they were darker than NaCl treated group (Fig. 3). In the carvacrol treated group, all the lungs were observed to be healthy as observed in NaCl group. The most striking appearance was the transparent and smooth margins of the lungs indicating the complete loss of tumor development (Fig. 4).

In this study, carvacrol was shown to possess antitumor activities on lungs induced by DMBA. To the best of our knowledge, this is the first report on the antitumor effect of carvacrol in vivo. Its mechanism of action has not been studied, which requires further investigations. On the other hand, analgesic effects (5) and also mast cell degranulation inhibiting actions of carvacrol and carvacrol rich essential oils (unpublished observations) indicate a possible effect of carvacrol on calcium machinery of the cells. It is known that intracellular free calcium plays an important role in mitogenesis (11,12), analgesia (13) and degranulation which is actually an exocytosis (14) thought to he involved in the mechanism of action of carvacrol. 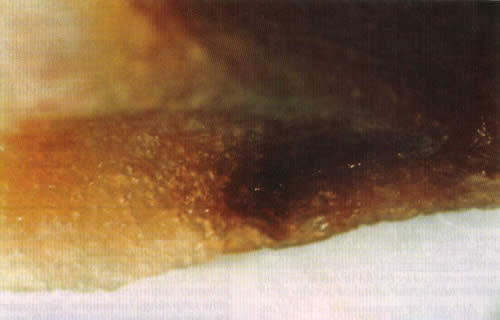 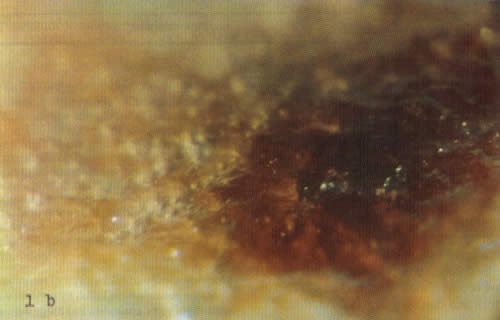 Fig. 1 Photomicroscopic appearance of lungs of the DMBA treated rats, a) x20; b) x40. 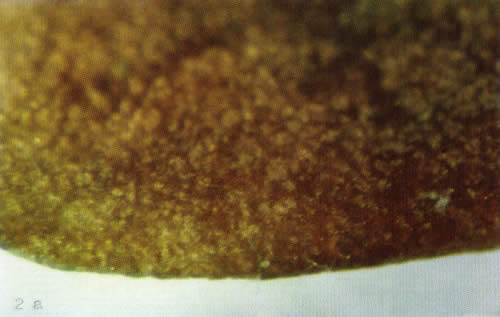 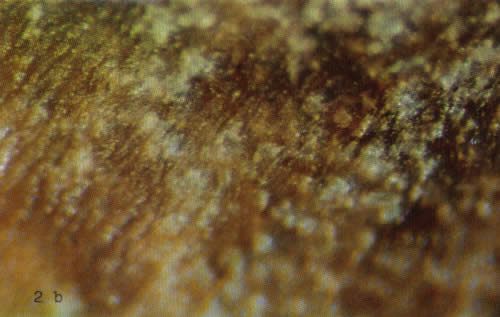 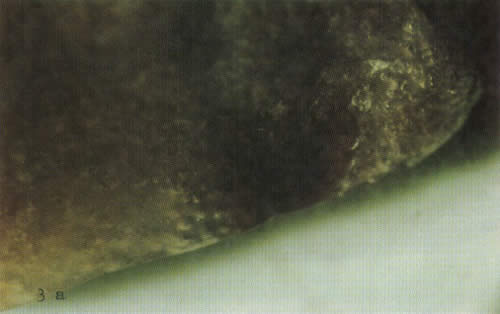 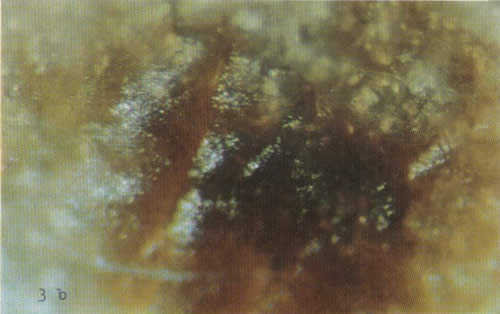 Fig. 3 Photomicroscopic appearance of lungs of the DMBA treated rats after colchicine , a) x20: b) x40. 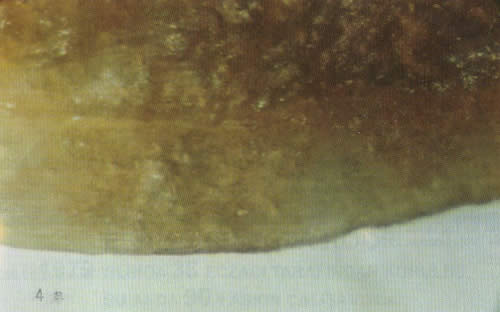 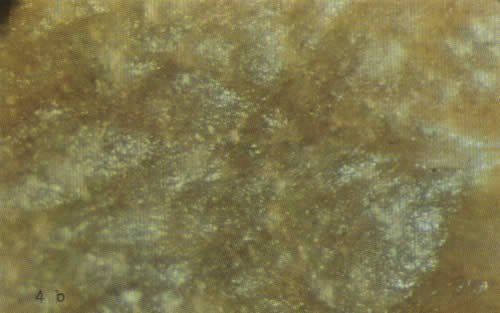 Fig. 4 Photomicroscopic appearance of lungs of the DMBA treated rats after carvacrol treatment, a) x20: b) x40.